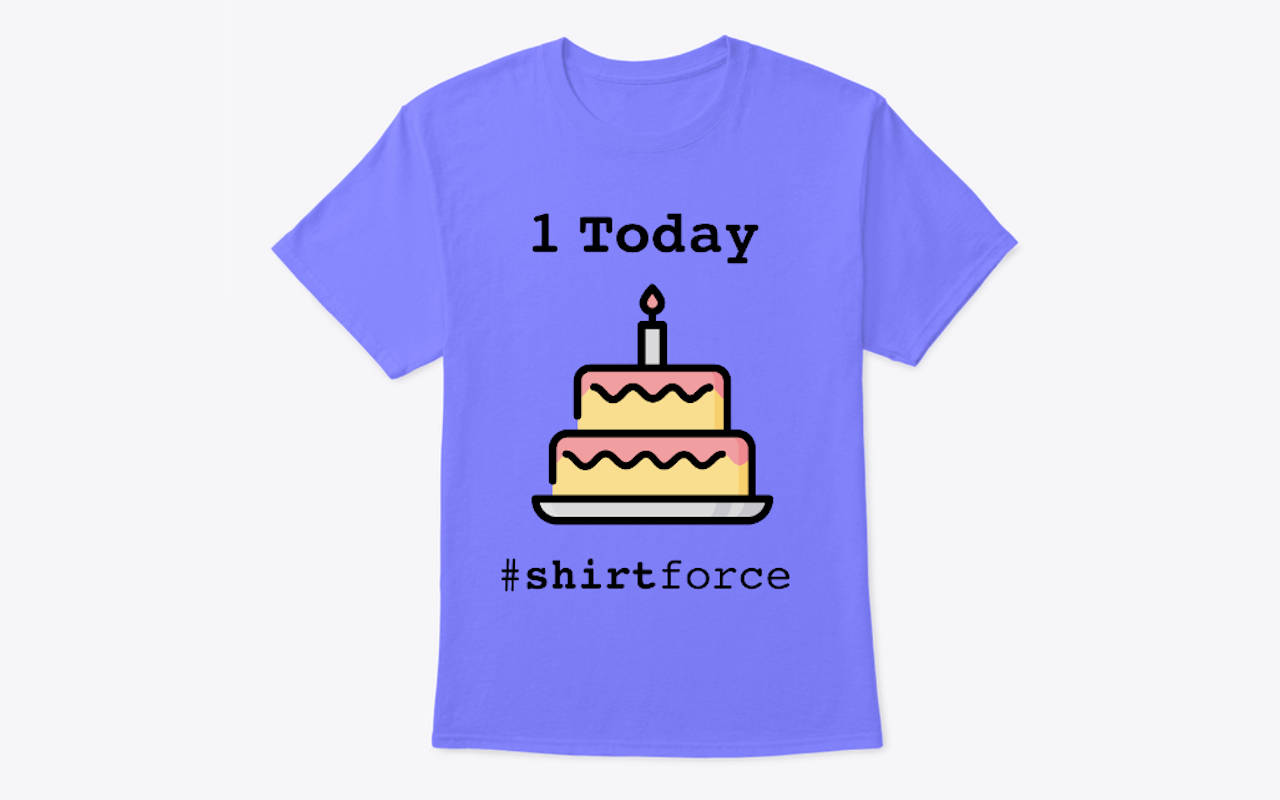 Woohoo! Can you believe that it was a year ago we launched?

And what of the birth?

As with all good side projects it started with a vague idea – I liked swag, especially funny t-shirts, and thought that I’d buy them if they were available.

In fact I had designed a couple of t-shirts for MobileCaddy that I often wore to Salesforce events. And it was actually at the Partner Forum in London 2018 where I wore a Forward Looking Statement t-shirt that I realised other folk liked them too. This tweet from Gemma was the real catalyst for me to make my shirts available for others… And what if ALL PROFITS WENT TO CHARITY? Game on.

There was then HUGE amounts of time on coming up with a name. Of course once I’d thought of shirtforce as a name (and written it down) it was obvious that it was very close to shitforce… Done deal!

Then onto the tees. The very first design was ASTRO SAYS RELAX, a take on the Frankie Goes to Hollywood album cover. I also worked on Deployment Fish and Clicks + Code > 0. With three designs in the bag I was ready to order a few test shirts to check for print and material quality. Whilst these were being processed I hacked together a quick website in WordPress with a bespoke plugin for the t-shirt listings – for the Salesforce folk this is like an App with its own custom object.

The test t-shirts came through, and I was pleased, so we were ready to roll.

On the 1st November 2018 I launched the site, and we were off to the races.

The first outing in the wild was at one of the Trailblazer Community meets of the London Admins. I got some good feedback and fished for ideas. I did the same at several other events, and it was then that I got our first community design submissions in (gawd bless the Ohana).

Sales of the t-shirts have gone well I’d say, and with over $1440 raised for charity in our first year I’d say it was a success.

Yes, all profits from sales go to charitable causes, and these charities are chosen by you. Each quarter every sale’s proceeds go to a new charity, and to date we’ve donated money to  Pancreatic Cancer, Salesforce Supermums, Cancer Research UK, and the Fund for El Paso shooting victims.

We’re so pleased to be able to do this, and can only thank each and every one of you for helping us.

As I’ve mentioned the first designs were my own doing, but we’ve also had some cracking designs from the community, including these beauties from folk like Rob Cowell and Chris Emmett (thank you chaps, so much!)

Many designs have also been the inspiration from output of chats with folk, or the result of idea submissions… And I’m hoping I’ve got them all here (shout if I’ve missed any), but thanks to all these peeps for their time and creativity.

Some of the designs have possibly sailed a little close to the wind, and I got particularly excited when I saw visitors from Org 62 appearing in my analytics… but we’re trying hard to stay on the light side of the force, and seeing tweets of Shirtforce tees from inside “the towers” is always a thrill.

And it’s not just t-shirts is it… We also launched our first hoodie, for all the Troublemakers out there.

So what for year two?

In short, more tees for our community, and MOAR money for charity. And which charity for this quarter, well you decide… Watch our Twitter for the next poll.

I have a few more designs in the work, and may even have some discount codes standing by, so watch this space.